Usri falls is one of the top tourist destinations in the region of Giridih. The mesmerizing and beautiful water fall is made by the river Usri that flows through the hilly terrain of the district. When you are in the city of Giridih, make sure you pay a visit to the nature’s unrefined beauty at Usri falls. The Water gushing out from the hill top surrounded by greenery creates a panoramic view that mesmerizes the visitors. The enchanting water fall in the city is quite popular and has emerged as a famous picnic spot for the residents. 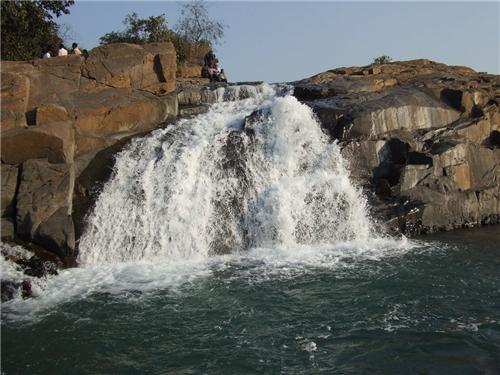 The Usri River is a tributary of Barakar River that flows through the region. While passing through the hilly area, the river flows down the steep gorges. While falling down the river splits into three clear stream of water. The water falls from the height of 12 meters creating white foaming water. Surrounded by dense forest that is home to several wild species Usri fall surely adds beauty to the wild landscape of the region. Some of the rocks have been split up into blocks of huge dimension with polished and clean surfaces. After passing through the falls, the profile of the Usri river changes, the lower portion is mostly flat, slightly undulating, which gives way to gorge like form.

The region of Usri falls is surrounded by rocks and hilly terrain. The rocks are laminated and metamorphic in nature. These rocks are eroded out of the igneous rocky hills. The polished and shining surface of the huge rocks mesmerizes visitors and they are seemed to be carved out carefully by any artist. The water fall is named Uri falls after the river Usri which is a tributary of Barakar river. The aesthetic appeal of the river dropping in different streams is enhanced by the dense forests that surround it. The water after falling from the gorges calms down and flows to form a deep and undulating river. The area is surrounded by deciduous a forest that is home to several wild animals.

The region observes dry days during the summers. The summers in the region are generally dry and harsh. With the onset of monsoon the climate becomes pleasant. The monsoon here starts in July and lasts till October. The hottest summer month is May when the mercury levels can go as high as 47 degree Celsius. The winter season starts from November month and remains till March. The tourist destination remains open throughout the year, but the best time to visit the falls is during the month of October to December, when the climate is slightly cold and pleasant.


How to Reach Usri Falls ?

The nearest town to the Usri falls is Giridih. The nearest railway station is Giridih railway station. From the station one may find several easy mode of transportation to the Usri falls.The region of Giridih is easily accessible by road. The roads to the city are well developed that makes the transportation easier. The great grand trunk road passes through the city of Giridih making travel in and out of the place very convenient. Tundi, is nearby the falls which is almost 13 km away from the main city. From the city one can easily get local mode of transportation such as tonga, rickshaw, auto and buses that will help you to reach the destination.


Places to Stay near Usri Falls

The tourist potential of the region is well recognized by private tourist corporations as there are ample accommodation facilities near Usri waterfalls. One can select nay hotel to stay in the city of Giridih Hotel Galaxy International, Manasarovar Hotel, Nikhar Hotel, Sapn ahotel, Swagat Hotel or Hotel Sakhina. These hotels provide special facilities for the travelers at lower rates. The tariff of the hotels is not much costly they starts from Rs 300 and could be higher based on the facilities provided in the hotel rooms. Generally Ac hotels are slightly costlier than the normal deluxe hotels. Few of the hotels provides transportation facilities to railways stations so that the customer need not to face any hassle.


Nearby Places to Visit

Apart from the spectacular Usri falls, the region has several places to roam around. The Parasnath hills are yet another fascinating place to visit. It is one of the highest mountain ranges in the state of Jharkhand.The shrine in the Parasnath region is a famous Jain pilgrim spot which observes the influx of several visitors throughout the year. Also, the 2000 year old Jain temple in nearby village Madhuban attracts considerable number of pilgrims and tourists very year. If you wish to spend your time amidst nature then Khandoli Park is the best place to check out. The region is surrounded by blue water and greenery that enhances the beauty of the region. The watch tower in the Park gives the mesmerizing view of the entire Giridih city.